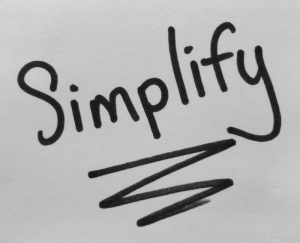 Most of my adult life has been spent accumulating stuff – tangible and intangible. Lots of stuff. Cluttering up my physical, mental and emotional space. Most of us have stuff – lots of stuff. (I feel like George Carlin! If you have never heard this bit from him, check it out below. A little bit ‘o swearing, but pretty tame compared to most modern comics.)

Sometimes we don’t have a chance to decide which stuff to get rid of. Like when your external hard drive crashes and all the stuff on it is gone for good.

Yeah, that happened. I walked into my studio one morning during the Christmas Holiday (Holiday? What holiday!?) and heard a metallic scraping buzzing sound emanating from my main external drive. This is never a good sound. I turned off the drive to prevent any further damage, but part of me realized that the damage had already been done.

Oh, some of it was backed up months ago, but because it was an external drive, it doesn’t do it automatically and somehow the regular backup didn’t get done, so a lot of good new stuff is lost forever.

I’ve been taking yoga at the Y down the street for several months now and I think it may be working, because I didn’t freak out when I realized that I was probably missing a LOT of stuff that I would never be able to get back.

Instead I decided to take a breath and see what happened in the coming weeks. Did I need to access that stuff?

Some of the stuff is gone for good – and soon will be forgotten.

My point, the less stuff we have, the easier it is to keep track of. So, simplify. And back up your stuff.

The only real issue I see with simplification is that at some point, should someone want to do a complete historical retrospective audio visual presentation upon my demise, they will not find some important stuff that happened during the great hard drive crash of 2015. I’m sure I am not alone.